The Year of the Rat is upon us.

We are about to welcome in the Chinese New Year and this will be the Year of the Rat. In Chinese culture there is a different calendar to the January to December one that you may be used to. The Chinese lunar calendar is a little more complex and consists twelve signs of the zodiac, represented by a different animals, one for each year on a twelve year cycle. The calendar is connected to the moon (hence the alternative name of Lunar New Year and Lunar Calendar), meaning that the start date of the Lunar New Year fluctuates from year to year. However, you then need to consider the five elements, which are wood, fire, earth, metal and water. The 12 years and 5 elements make up a 60 year cycle.

Year of the Rat is interchangeably referred to as Year of the Mouse. Decorations this year include both rats and mice, the mice often depicted by Mickey or Minnie. A nice marketing opportunity for Disney.

The Twelve Animals of the Chinese Zodiac

Why is the Rat the First Animal in the Zodiac?

Legend has it that the rat won the zodiac race commanded by the Jade Emperor. The Emperor declared that the race would determine which 12 animals would make up the Chinese Zodiac. As the winner, the rat is therefore the prestigious first animal in the zodiac calendar.

Characteristics of the Rat

The rat won perhaps a little unfairly. Legend tells, that the clever rat hitched a ride across a river on the back of the trusty Ox. As they neared the finish line, the rat jumped from the Ox’s back, thus crossing the finish line in pole position, ahead of the Ox. As a result the ox came second and so the rat is thought of as being cunning or clever. Which depending on how you spin it could be either a positive or a negative trait.

The legend goes further and tells us that the cat came 13th in the race and so just missed out on a place in the zodiac. This is sometimes said to be why cats chase mice and rats.

Is Year of the Rat your lucky year?

Generally if it’s the year of your zodiac animal, it’s believed that it will not be your best year. Sorry Rats, better luck next year. The Rabbits, Sheep, Roosters will share you gloomy outlook.

It’s supposed to be a reasonable year for the Tigers, Snakes, Horses, Dogs and Pigs,

Meanwhile, if you are a Dragon, Monkey or Ox, the forecast is bright.

According to Chinese horoscopes, the Rat is usually best paired with the Ox, the Dragon or the Monkey.

You are said to be least compatible with the Horse, the Rooster and the Sheep.

Chinese New Year is both the best and worst time to visit Hong Kong’s flower markets. The markets are at their bustling best, but are also insanely busy. Be prepared to shuffle along the pavement, ducking and diving blooms and branches. On Hong Kong Island, Victoria Park will be crammed with flower stalls, but our favourite flower market is the permanent one in Mongkok, which expands to accommodate more flowers and shoppers.

Temples are at their brightest and busiest. We suggest a visit to Wong Tai Sin Temple. You can also see the twelve statues representing the twelve animals of the Chinese Zodiac. If you join us on a tour, we can tell you the rest of the Zodiac story.

Look out for a traditional Lion Dance around the city. Pairs of performers work together wearing a Lion costume and dance daringly on raised poles.

How to Discover your Chinese Zodiac Animal

If you want to find out whether you were born in the year of the rat or which zodiac sign you are, check this zodiac calculator. It’s easy to make an error if you birthday falls late January to early February.

If you’d like to explore Hong Kong, please get in touch with us. We offer private walking and cars tours or can cater to larger groups for corporate visits or school outings. Our licensed tour guides are friendly, knowledgeable and fluent English speakers. Let us show you the best of our city.

Wishing you a happy and prosperous Year of the Rat. 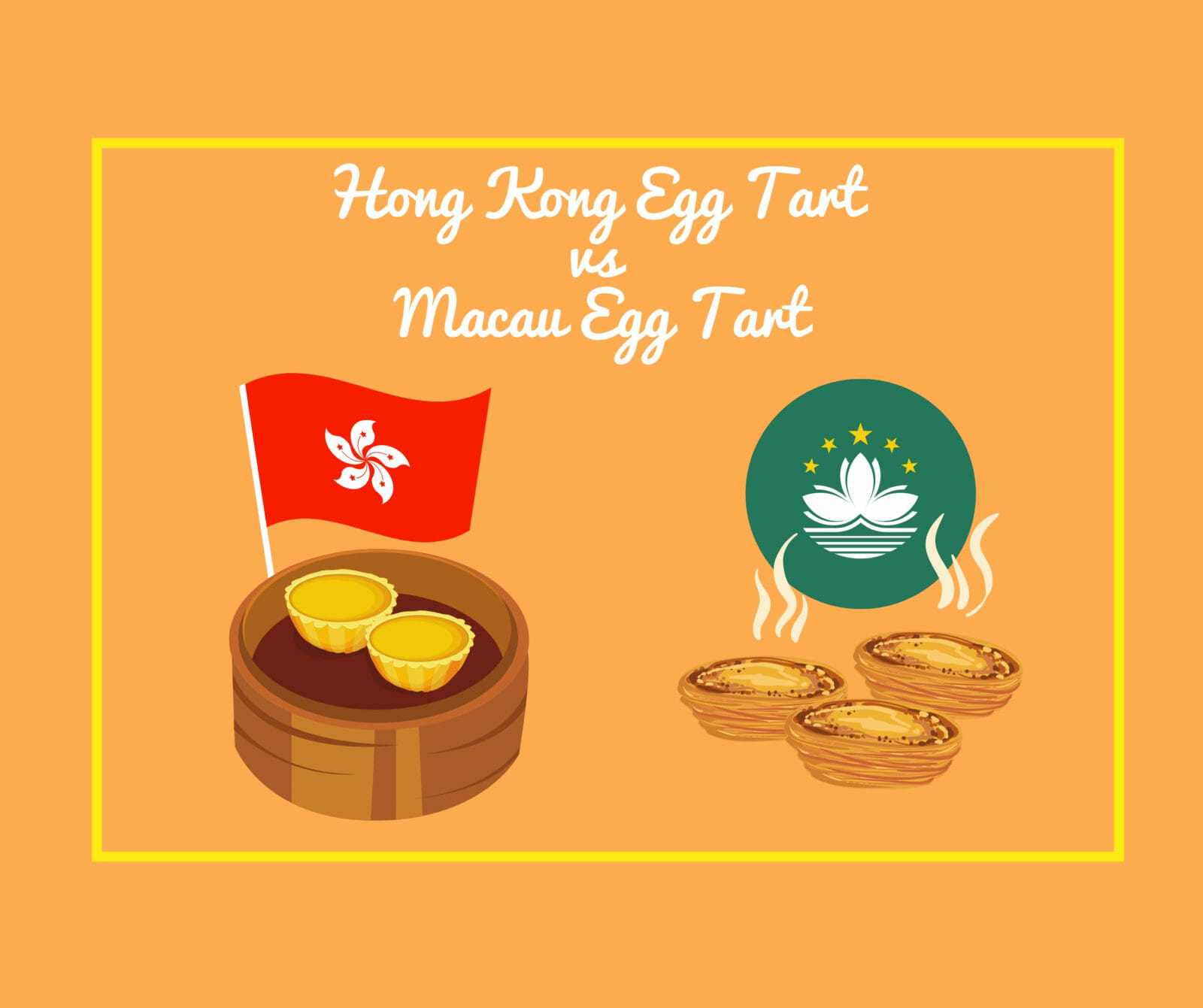 The Hong Kong egg tart and the Macau egg tart are both famous in their own right. Superficially, they are pretty similar, but the devil is in the detail.

There’s nothing like a bit of friendly rivalry, which is exactly what we have in this corner of the world when it comes to the egg tarts of Hong Kong vs the egg tarts of Macau. The origins are somewhat obscured by the mists of time, so we’ll do our best to untangle them for you.

The Brits have been churning out custard tarts since medieval times and are said to have brought them to this corner of the world in the early 1900’s. Hong Kong has cheerfully adopted and adapted them, the result being the egg tarts we eat today. Many bakeries offer them and they are an inexpensive must-try treat if you’re visiting.

Tai Cheong bakeries are probably Hong Kong’s most famous egg tart bakers. They have been purveyors of egg tarts since the 1950’s and Chris Patten, the last Governor of Hong Kong was a regular customer back in the day. There are a few of theses bakeries dotted about the city, the one on Lyndhurst Terrace, Central almost always has a queue outside. If you’re visiting the Peak, there is also one inside the Peak Galleria on the second floor.

Macau’s Portuguese egg tarts, sometimes referred to as Macanese egg tarts are the legacy of Lord Stow. Their creator was not actually a Lord. In fact he was called Andrew Stow and Lord Stow was a nickname. Originally he moved to Macau as a pharmacist, who in later years turned his skills to formulating a winning recipe.

Portugal has been the home to the Pastel de Nata since the 18th century.  On a visit to Portugal, Andrew Stow was very taken with the traditional Pastel de Nata and returned to Macau determined to recreate these delicious tarts. He didn’t have an exact recipe and experimented until he found a winning formula. Launched in 1989 he gave them away free to begin with and soon these egg tarts caught on like wildfire and have since become a quintessential symbol of Macau.

Honestly, we think they’re both delicious. However, for us, the Hong Kong egg tart wins by a whisker. This is due to a mild personal preference for short crust pastry over flaky pastry and perhaps a little bit of bias because we love Hong Kong.

We’d be delighted to help you take a taste-test to decide which version you prefer. We can easily include a Hong Kong egg tart tasting during one of our walking tours or food tours. And, if you’re heading to Macau, why not book our guide Aubrey to show you around, he can certainly include a stop at Lord Stow’s bakery so that you can try the Macanese version.

In case you didn’t know, Hong Kong and Macau are close neighbours. Both are Special Administrative regions of China and both are worth a visit. Hong Kong is the larger and better known of the two. Formerly it was a British Colony, it’s a true melting pot of east meets west. Famous sights include the Big Buddha and world famous harbour and skyscraper panorama. Additionally there is both a bustling financial district and an abundance of nature and stunning hikes.

On the other hand Macau was once a Portuguese colony and to this day there are pockets of beautiful architecture such as the ruins of St Pauls. Macau’s other big draw is its casinos.

Rather than comparing and competing, we think Hong Kong vs Macau are places that complement one another, similar, but different. Find out how to catch a bus from Hong Kong to Macau here.

Hong Kong Greeters offer private walking tours, groups tours, virtual tours and self-guided Hong Kong Quests. Please don’t hesitate to get in touch to see how we can help you enjoy our city.