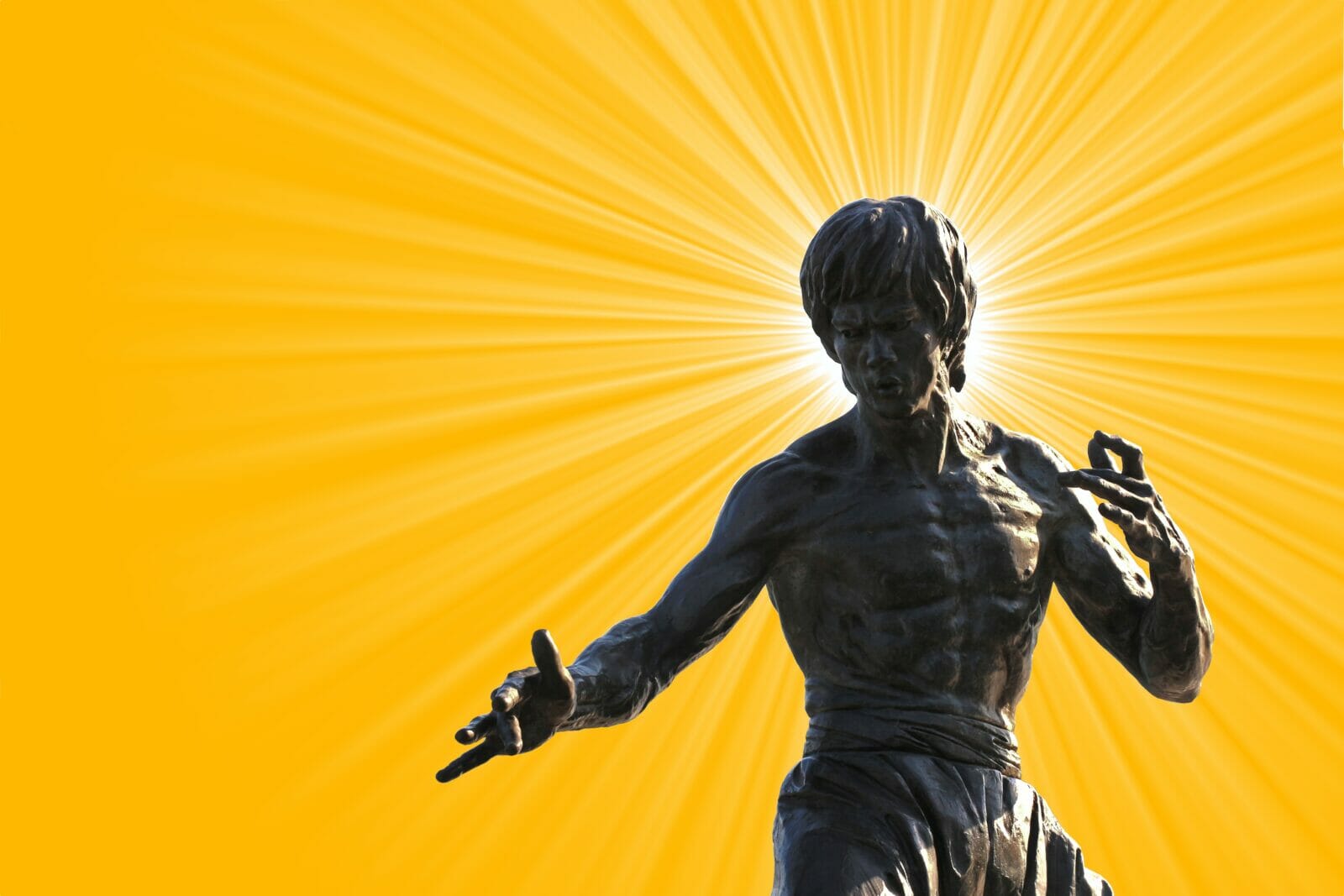 Bruce Lee is one of Hong Kong’s most famous sons and many visitors to Hong Kong are keen to follow the Bruce Lee Way. Despite his lasting worldwide fame as Kung Fu film star, it can be difficult as there are few reminders left in Hong Kong even though he grew up here. However, we’ve done the dirty work and tracked down the best Bruce Lee legacy sites for you.

Hong Kong’s Avenue of Stars is a similar idea to the Hollywood walk of fame, only it has the amazing backdrop of Victoria Harbour and the famous Hong Kong skyline. After being closed for an extensive refurbishment, it reopened to the public in 2019. Along the waterside railings are handprints of Hong Kong stars past and present.

Previously, the Bruce Lee statue was protected by ugly metal fencing, however after extensive refurbishment of the Avenue of Stars, his statue is now raised above a water feature, with Victoria Harbour and Hong Kong’s famous skyline as a backdrop. Note that the fast moving water of the water feature is meant to represent his lightning fast moves. There is an augmented reality app, but it’s all in Chinese, so good luck with that.

There has been a long running Bruce Lee exhibition on the top floor of Hong Kong’s Heritage Museum.

The exhibition was due to close at the end of 2020, however,  we’ve just read that the exhibition, is set to continue. At time of writing it’s closed for a revamp, but is due to reopen later in 2021 and due to its popularity, has been extended until 2026! This is great news for Bruce Lee fans.

You can see movie props, costumes, footage and personal possessions of the late great Bruce Lee.

In the meantime, there are souvenirs available in the onsite gift shop and a large statue in the courtyard outside. Many people don’t know about this second statue, so it tends to be far less crowded and although the backdrop is less exciting, the pose is pretty awesome.

Visits to the Heritage Museum are free, although there are often special exhibitions which carry a charge.

Nearest MTR station is Sha Tin on the East Rail Line. If you want to turn this into a days’ outing, you could combine it with a trip to the nearby 10,000 Buddhas Monastery.

The third likeness of Bruce Lee on display in Hong Kong is at Madame Tussuards Wax Work Museum at the Peak. As the waxworks are geared to the local market. So if you’re visiting from overseas, there will be plenty of celebrities you’ve never heard of. However, we thought it was worth mentioning for all you Bruce Lee aficionados. Additionally, waxworks of Kung Fu icons Jackie Chan, Donnie Yen and Michelle Yeoh are also on display.

Make the most of your trip to the Peak with our Peak Guide and check opening times for Madame Tussauds here.

Our favourite way to get there is by Peak Tram. The Wax Work Museum is in the same building as the Peak Tram terminus, so you can’t miss it!

Scenes from the 1973 film Enter the Dragon were filmed at the Tsing Shan Monastery. The location is off the beaten track and a little isolated. However, if you’re prepared for a short hike, you can visit for yourself. Online information is scant, but the monastery is thought to have existed in some form for around 1500 years. There is also a nearby cave housing some kind of vertebrae in a cage. Legend suggests it could be the bone of a dragon! There were Bruce Lee information boards and cutouts dotted about, but we’re unsure if they are still there.

You will find another Enter the Dragon film location in Aberdeen, located on the South side of Hong Kong Island, including a shot of the iconic the Jumbo Kingdom, as seen in this panoramic shot of the typhoon shelter from the movie.

These days this location is very accessible by MTR, either alighting at Wong Chuk Hang station for the short walk to the Shum Wan pier for a sampan. Otherwise, you can alight at Lei Tung station to explore Ap Lei Chau and also flag down a sampan for a short tour on the water. We also are offering virtual tours of Aberdeen whilst on a sampan. Join us for for a very dynamic real-time movie experience! You can find out more about our virtual tours here.

If you pop over to Hong Kong’s neighbour, Macau, you can visit the Jardim Luis de Camoes. This location was used in the film Fist of Fury. According to a recent newspaper article, Bruce Lee fans have suggested this would be the perfect spot for a giant Bruce Lee statue. So, we will watch this space with interest. Macau has been the backdrop or film location for several other famous films. You can read more about them in our Macau Armchair Travel post.

Macau can easily be reached from Hong Kong by bus or ferry.

Back in 2013 a series of Bruce Lee information boards were displayed across Hong Kong at prominent locations from Bruce Lee’s past, to form a memorial trail.

The trail was named The Bruce Lee Way. It takes in 6 locations, including schools attended, (Tai Kok Tsui school lavatory, La Salle Primary School, Tak Sun school), Bruce Lee film locations, one of which was the Tsing Shan Monastery as mentioned above, the other being at Ocean Terminal. Finally, the statue of Bruce Lee at the Avenue Of Stars in Tsim Sha Tsui was part of the route.

There are no recent sources confirming whether or not any of the boards survive. Should you have any up to date information and/or images, we’d love to hear from you. That way we can provide an update for our readers. 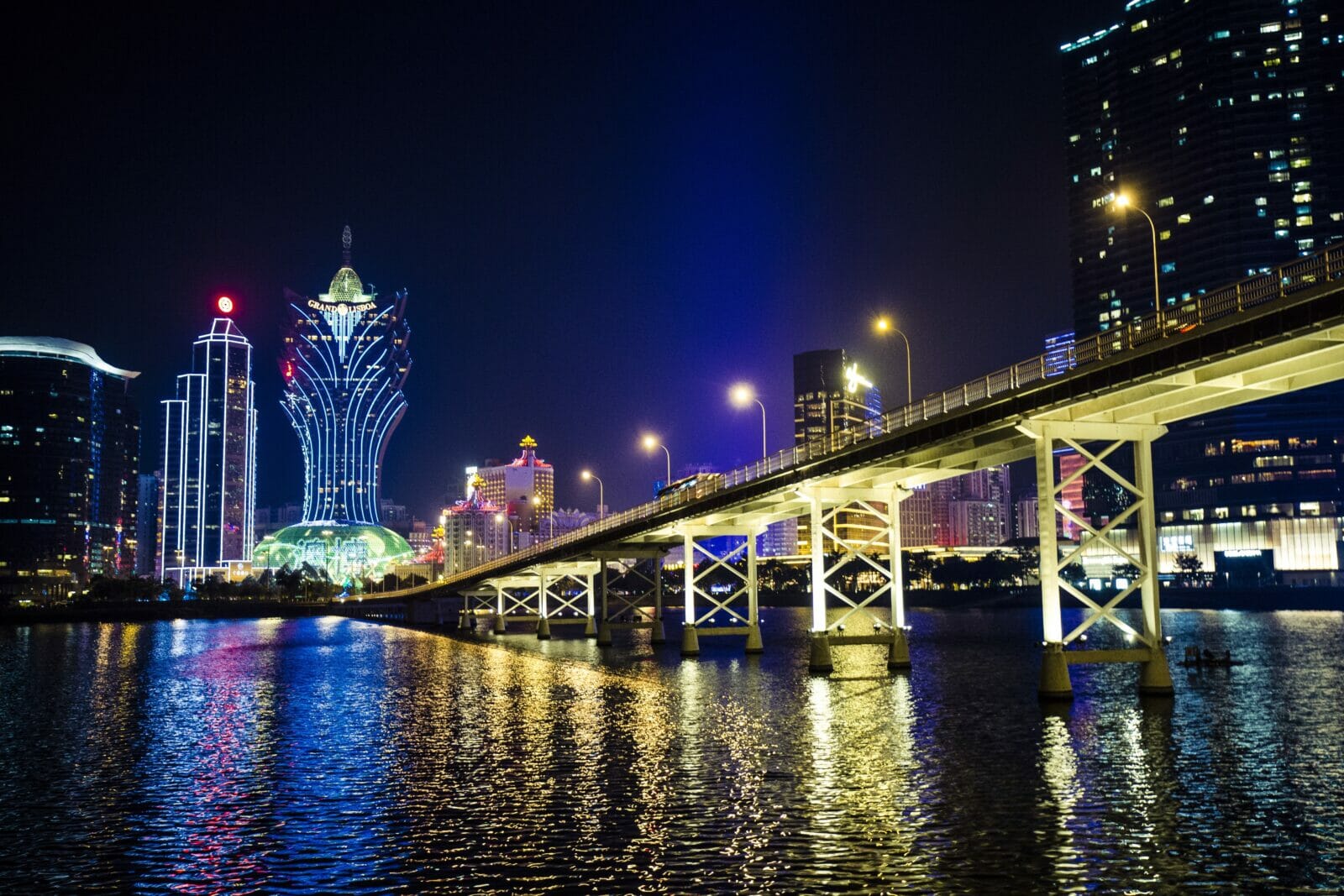 While world travel has taken a backseat, discover Macau movie locations from the comfort of your armchair.

This post contains some affiliate links. Should you click through and make a purchase, we may make a small commission at no additional cost to you.

We’re surprised Macau hasn’t been used as a movie location more often. It has a unique and colourful blend of architecture, with both Chinese and Portuguese influences. Additionally, you will find a cluster of glittering and unique modern buildings along the Cotai strip. And of course let’s not forget the iconic Golden Lotus shaped casino.

You’ve probably seen at least one of these films, but perhaps not realized where they were set/filmed. Nevertheless, here are our top Macau movie locations.

Macao is a 1952 film noir. It is both the oldest film on our list and also the only where almost the entire story takes place in Macau. Starring silver screen legends Robert Mitchum and Jane Russell it’s filmed in black and white and looks a dated to modern audiences.

Three strangers meet on a boat trip from Hong Kong to Macau. Intrigue centres around a casino that is involved in some shady dealings and the two main characters played by Mitchum and Russell have a bumpy road to romance.

Now You See Me: The Second Act

Following the success of the original Now You See Me film, where a group of talented magicians team up to perform an impossible heist in front of a live audience, a second film reunited most of the cast for a second adventure.

Part of this film was set in Macau. Iong’s Magic Shop is an actual magic shop that has been in Macau for the last 30 years. You can visit the shop yourself and stock up on all sorts of equipment to help you practice sleight of hand.

The famous Sands casino, colorful and once infamous Rua de Felicidad and the Macau Science Centre were also used as film locations.

Indiana Jones and the Temple of Doom

The opening scene of this family favorite film, supposedly set in Shanghai, was in fact shot in Macau. The hotel used as the Club Obi Wan was the Pensão Sun Sun Hotel, however, the Pensão no longer exists and a newer one stands in its place. In a nod to the film, the current hotel has called its bar the Obi Wan bar.

Harrison Ford stars as Indian Jones, the sometimes mild-mannered tweed jacketed professor of archeology, his alter-ego being the cocky, whip cracking adventurer who heads off on dangerous quests to find lost treasures.

This is the second film in the series, preceded by Raiders of the Lost Ark and followed by The Last Crusade and The Kingdom of The Crystal Skull, a fifth instalment is planned for 2022, but where will it be filmed?

The Man with the Golden Gun

James Bond is possibly the silver screen’s most famous spy. In The Man with the Golden Gun, Roger Moore stars as 007.

Sadly, the famous Macau Palace floating casino where the action took place, is no more. It was reportedly towed away in 2007.

Last, but not least, we have Skyfall. This is the second James Bond movie on our list, although its place is a little tenuous.

Here, Daniel Craig stars as James Bond and travels from ancient Istanbul to the glamour of Macau. However, frustratingly the Macau scenes were shot at Pinewood Studios in the UK rather than on location. Again, there is a (different) floating casino in this film, but don’t waste time searching for it, this one never existed in reality and was a studio-built film set.

Did any of those Macau movie locations surprise you?

Check out our other Armchair Travel Posts

This post contains affiliate links. Should you click through and make a purchase, we may make a small commission at no additional cost to you.